Parents have come up to me and asked me this question numerous times! No…it is not a silent hint to tell me that my kids are brats, but on the contrary I think they are relatively well behaved…However they do have their “off days” as well. And Yes! on those “Off days”, that is when the Mr. Cane makes his appearance. 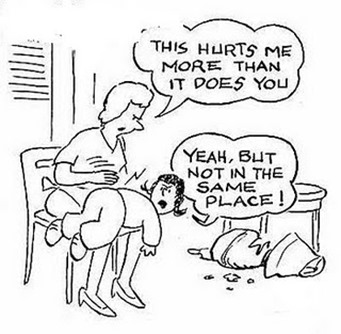 No matter what you call this piece of bamboo, the mere motion towards the cane seems to make the kids motionless, and moves the kids into a quick retreat into their corner. However, up till today, I can still count the number of times that I have actually used the cane on the kids, as most of the time, the cane has left its mark on tables, chairs, car dashboards, rather than on the butts of the actual victims.

Nevertheless, some parents tell me that the Cane is archaic, and it should be kept in that prehistoric age. It has existed in societies which “did not know any better”,  and with our knowledge about Parenting today, it should be done away with.

However, till today, there is a Cane hanging on my room door…

Why do I persist?

Firstly, I grew up under it. I never liked it, but it seemed to work for me and my brother. Thankfully, my Parents did not go crazy when the cane was in their hands, and although it was painful, I did not grow up resenting it.

2ndly, it is spoken about in my religious beliefs, and therefore it does have some value in my parenting methods.

However, modern Parenting Methods has also taught me, that Caning has to be applied with Wisdom.

1. The Cane should not be utilized when in ANGER!

If one Parent is known to be the “Hot Head”, the other Parent should take the lead in this matter. After all, Parenting is a dual responsibility.  With this consideration, I believe that we can avoid the abuses that have come with Caning.

When a loving Parent who has a good relationship with his/her child, caning can serve as a meaningful negative consequence in cases of undesirable behavior. I have been a victim of Caning before, and although it was always painful, I have never thought that Parents loved me less. I admit I may not have understood it at the moment, or even 1 week later, but as I look back at it today, I can see the benefits of that fateful day.

2. The Cane should be Age Sensitive!

Groups like Focus on the Family do not recommend the use of strong disciplinary measures from birth to 18 months. In fact, they may just need a bit of distraction, in order to put them on the right track. Simply directing the Baby’s attention to something else may solve the problem. I do not intend to use when the kids become teenagers. From Secondary School, I expect the kids to come to a level of maturity, where “Reason” should take a more predominant role.

Parents should not be quick to draw out the Cane at the slightest disobedience. Too much or too little discipline on a child can seriously effect the child’s development. Punishment should be applied only in cases of wilful disobedience or defiance of authority — never for mere childish irresponsibility. In no instance should it be administered harshly or capriciously.

Just as we believe in discipline, we also believe in Praising the kids. I believe that both tools serve an important role in a child’s development. When it comes to discipline, we also use a hybrid of methods, as each child is different. They have stood in “Time Out” corners, and have had their “TV” privileges taken away from them for a month.

Every child responds differently, and as Parents we need to find the best method that suits our kids, which aids them in their development.

Time to support local! The Covid situation has on

It's important to get the right nutrients when we

Our first ever combined zone meeting via zoom was