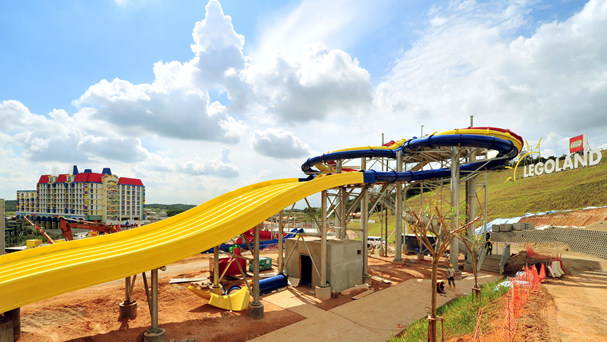 Introduction to LEGOLAND® Malaysia Resort
The LEGOLAND® Malaysia  Resort  brings together a LEGOLAND Park, Water Park and Hotel in one LEGO® themed  location. It is the ideal family holiday destination with more than 70 hands-on rides, slides, shows and attractions offering adventure, education and fun for action-packed day trips or short break destination. The

A unique LEGO® themed destination Containing the most successful rides, slides, show sand attractions from around the world, LEGOLAND Malaysia
Resort is tailor-made for the local environment. It will cover the same area of more than 50 full size football pitches and will contain approximately 15,000 LEGO  models made from over 60 million LEGO bricks.  Other LEGOLAND Resorts can also be found in Denmark, Germany, United States and the United Kingdom. 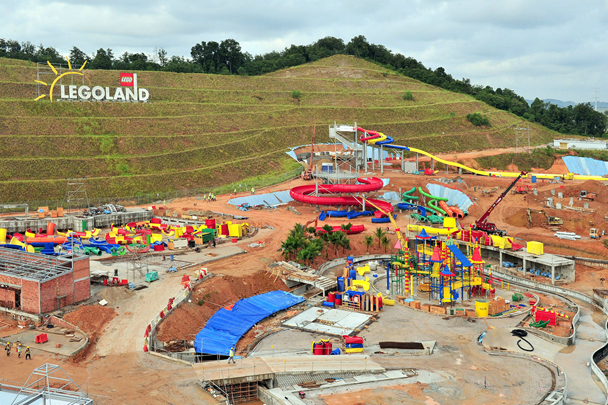 Areas of the LEGOLAND Malaysia Resort

LEGOLAND Park was opened on 15 September 2012 and is a full day  interactive family experience. The Park is divided into seven themed areas containing thrilling rides, exciting LEGO®workshops, and the awe-inspiring
Miniland, where Asia’s interesting landscapes, countries and landmarks are recreated in miniature scale using more than 30 million LEGO bricks.

LEGOLAND Water Park will open on 21 October 2013 and will be the largest LEGOLAND Water Park in the world. There will be more than 20 unique slides, over 70 LEGO models and much more for families to enjoy. The fully LEGO themed interactive Water Park will feature two restaurants, a retail store and some of the most famous attractions from other LEGOLAND Water Parks in the world. This includes the Build-A-Raft River and Joker Soaker.  The first is a unique concept where children can customise their own raft with soft LEGO bricks before floating down a lazy river. The latter is a fun interactive  platform in the wade pool where children can play with water
cannons as a LEGO jester model ‘tells’ jokes while 350 gallons of water pour down upon them.

LEGOLAND Hotel is scheduled to open in early 2014 and will turn days into nights families won’t forget. For a good reason too! All 249 rooms are themed to give guests the choice of playing Pirate, commanding a Kingdom or embarking on an Adventure. Interactive LEGO features can be found throughout the Hotel’s themed rooms,play areas, themed elevators and restaurants. LEGOLAND Hotel guests will also get exclusive early access to selected LEGOLAND rides and attractions before the Park opens.
Unlimited visits Annual Passes offer excellent value to families who want to enjoy the LEGOLAND® Malaysia Resort all year round.