My memory of Alice in Wonderland is the little blond girl in blue pinafore running after a rabbit that goes, “I’m late! I’m late!” And that is Disney’s take on the classic written by Lewis Carroll. From now to 22 Sep, catch Alice in Wonderland at the Art Science Museum. 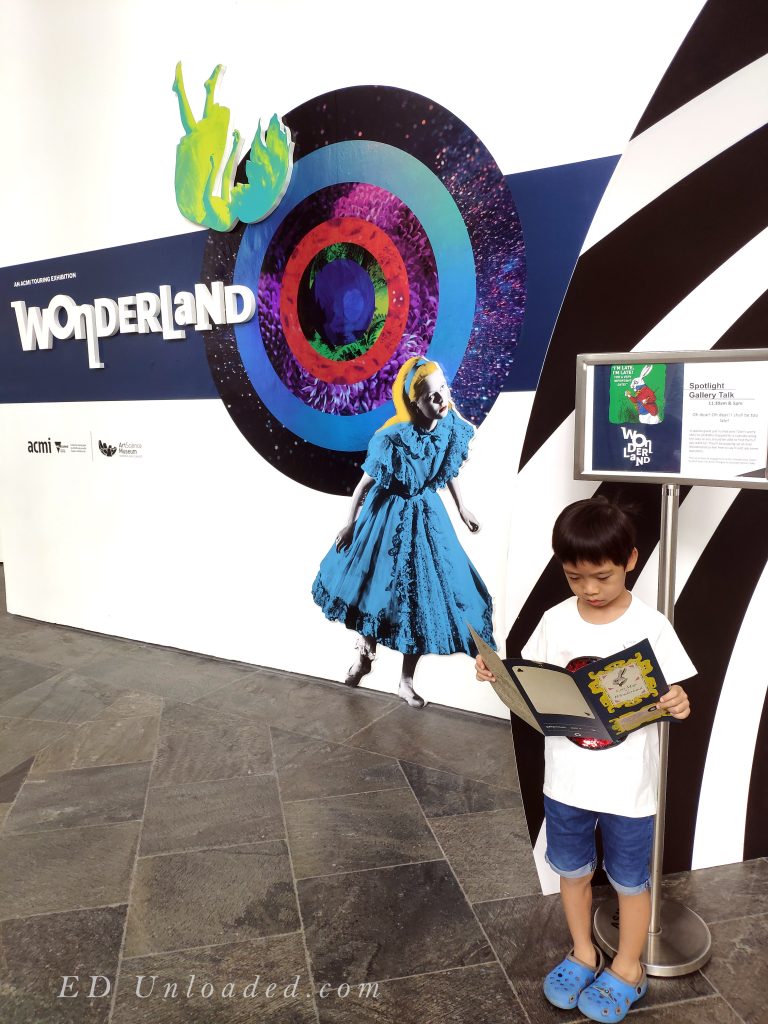 Wanting to bring my kids “down the rabbit hole”, I brought them to ArtScience Museum’s newest exhibition Wonderland. Lo and behold, the exhibition was a tad too dark for my 3-year-old and it was a struggle dragging him through the exhibition.

So you are wondering if the exhibition is suitable for young children, not really. The child needs to at least be old enough to understand the story of Alice in Wonderland, or he would probably not appreciate the exhibition much.

Nevertheless, we managed to give the 6-year-old a glimpse into the whimsical world of Wonderland and enjoyed ourselves at the end of the tunnel.

My kids love maps. The first thing they do when they enter the zoo or any theme park is to find the colorful pamphlet that will tell them where to go. They were more than delighted to find that each of us received a different map each – we were either the Cheshire Cat, Queen of Hearts, White Rabbit, or Mad Hatter. 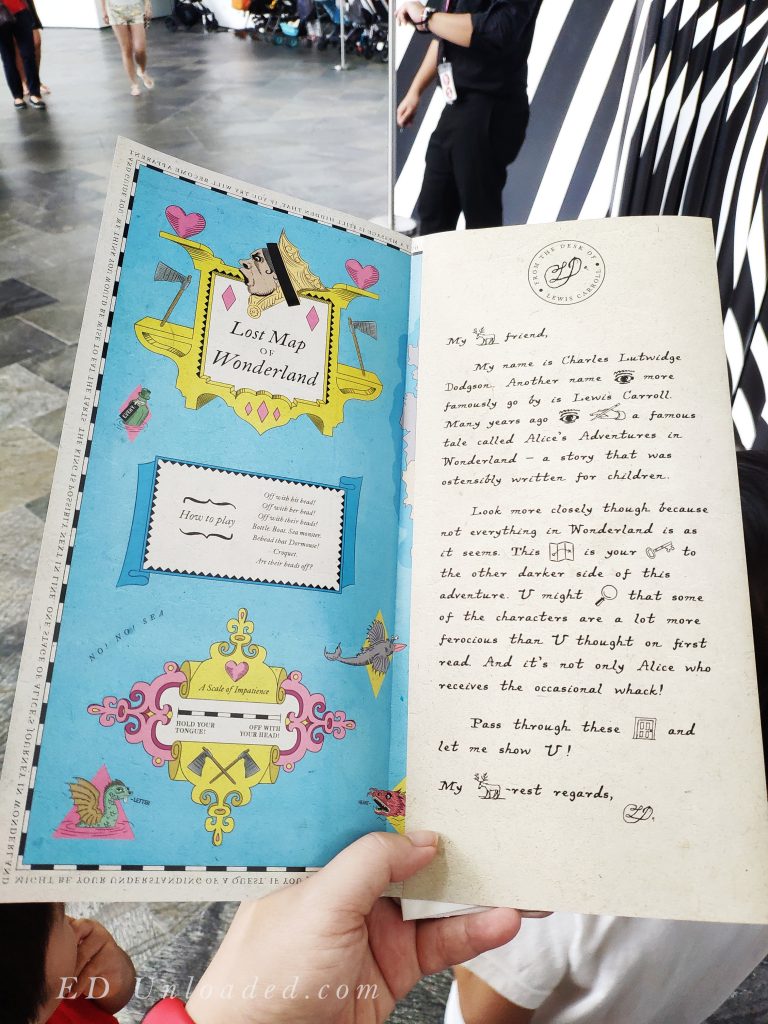 Stepping into the exhibition was like stepping into a distinguished English home. It was actually a replicate of Lewis Carroll’s drawing room. A nice lady in the room explained that there were scanners around the exhibition where we could scan our map. That would mark our journey in the Wonderland and if we want to relieve that memory back home, we just need to log into the website and key in the unique code on the map.

Following the journey of Alice in the story, the exhibit is segmented into nine sections. It was like walking down a memory lane where we got to see the behind-the-scenes of the different movies and animations made based on the novel. 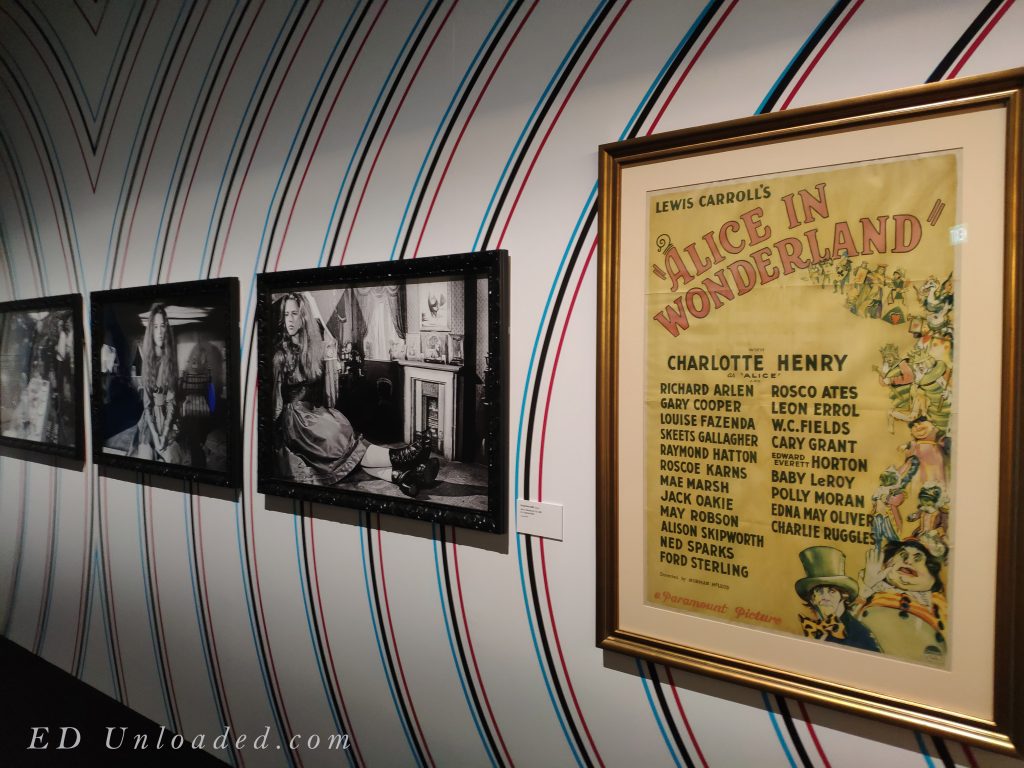 The Looking Glass House was especially intriguing with its display of costumes, props and set drawings of films made in different eras. If you followed all the Alice in Wonderland films through the ages, you will be fascinated by how the directors tried to bring the enchanted world onto the screens using different props and technics. 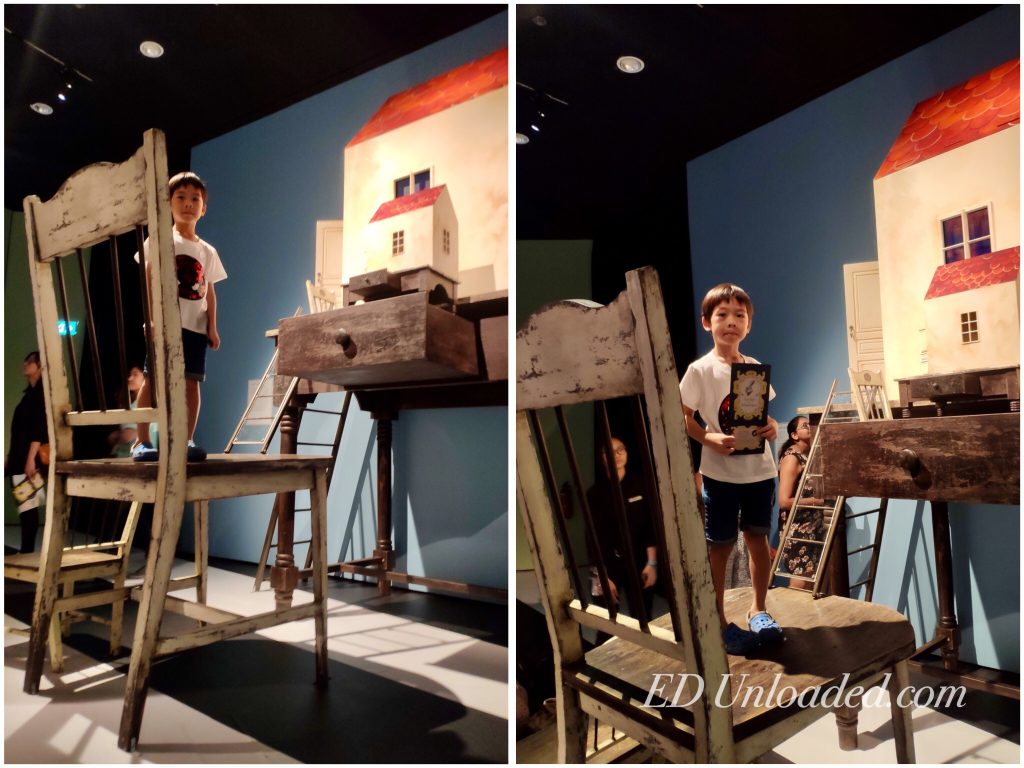 Anyone Care For Some Tea?

The most magical part of the exhibition was The Queen’s Croquet Ground and The Mad Tea Party. My kids, even the cry baby, enjoyed these two sections the most.

While the card soldiers were busy painting all the roses red in the story, you’ll see groups of children and parents huddling in groups cutting up stickers to decorate a card on their map. Once you’re done, you can scan your map at the machines and snap a quick shot of your face.

“Mommy, you must make a funny face,” said my son. Before long, my son and I, or at least our funny faces, were happily roaming the queen’s croquet ground in the projection flashed on the wall. 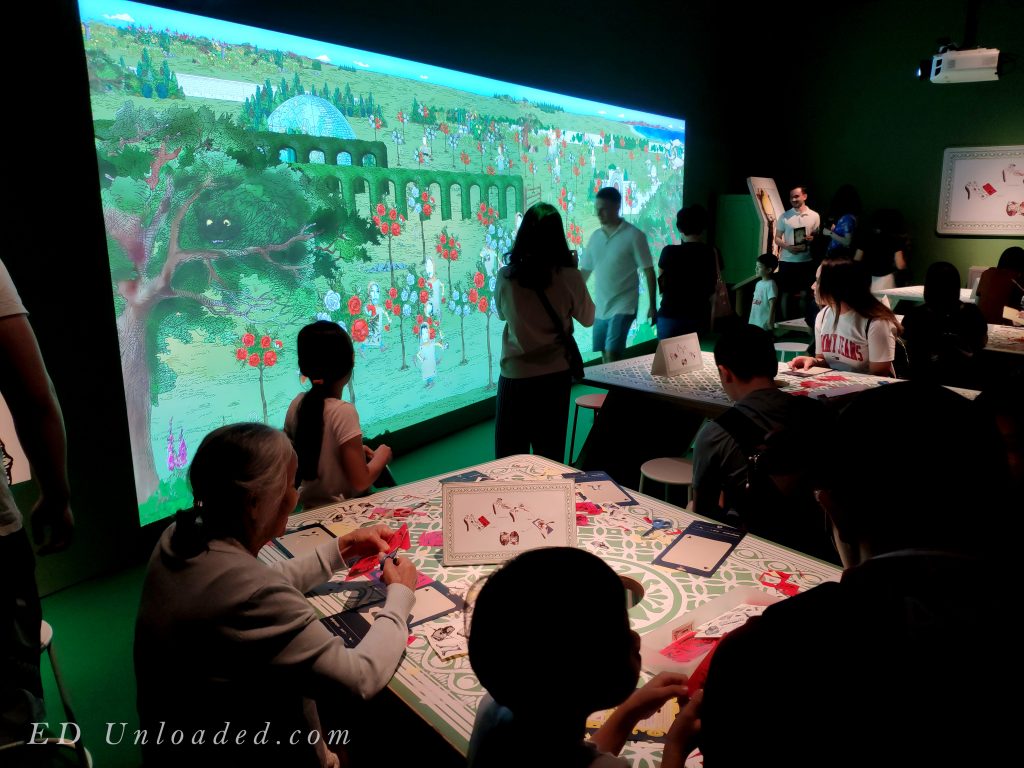 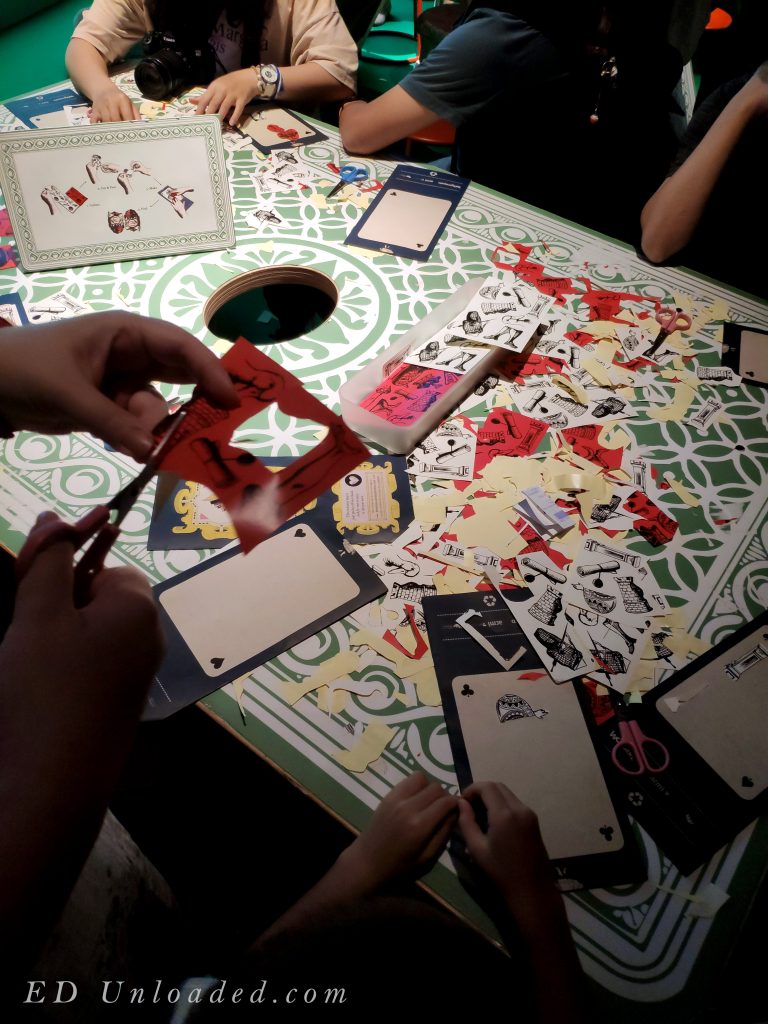 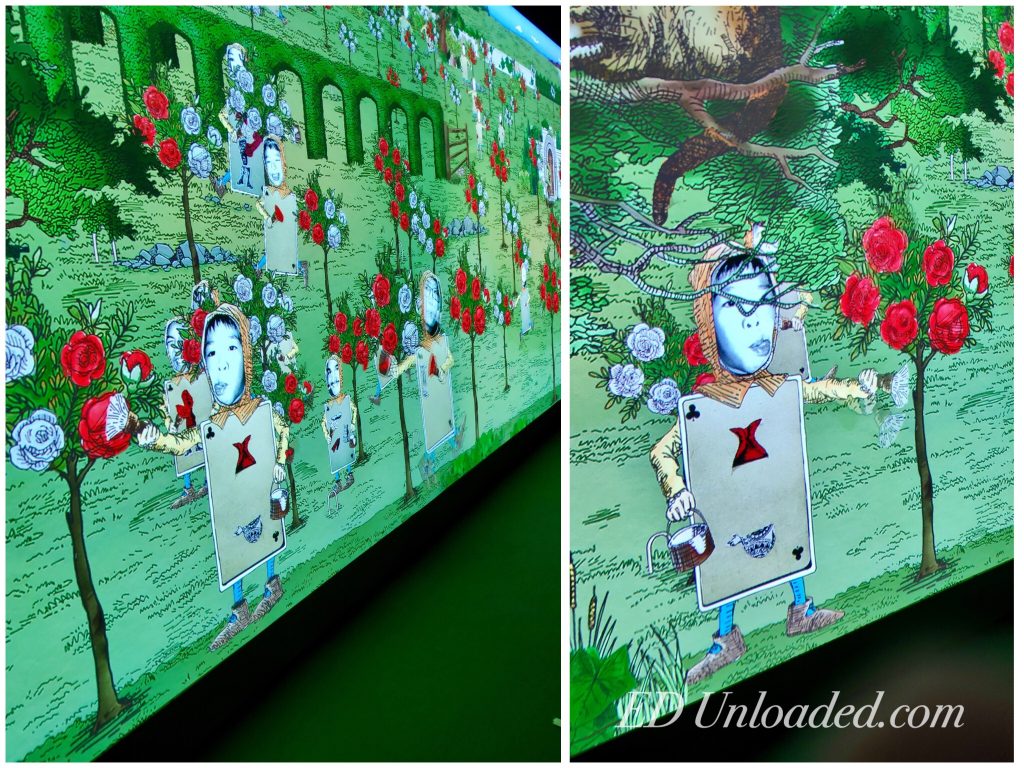 We were then ushered to a row of benches to wait for the Tea Party to start. The little one was very suspicious of what was going on behind those closed doors, but we manage to convince him that we are all going for a party!

It was a party indeed. We were seated around a large table with empty caps and plates but that was before the show started. The scene before us came to life slowly as the 3D light projected cakes into the plates and a forest scene onto the walls.

There were even ants crawling on the table. “I thought the ants were real,” my son said as we were exiting the room. Yea, it looked real. 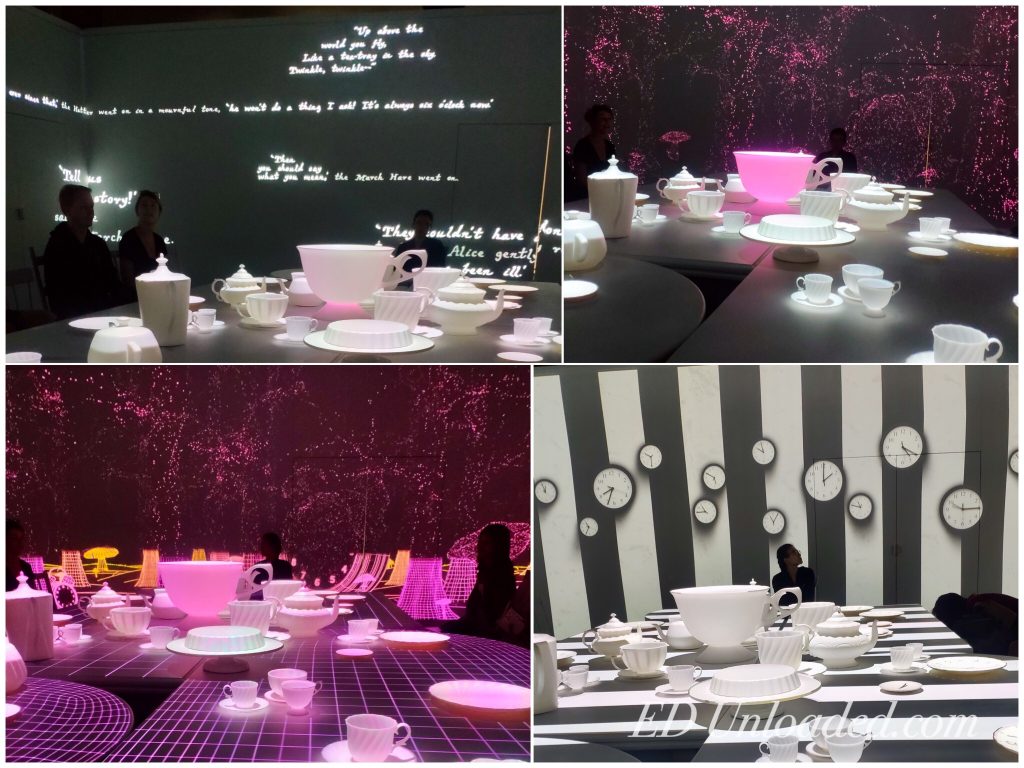 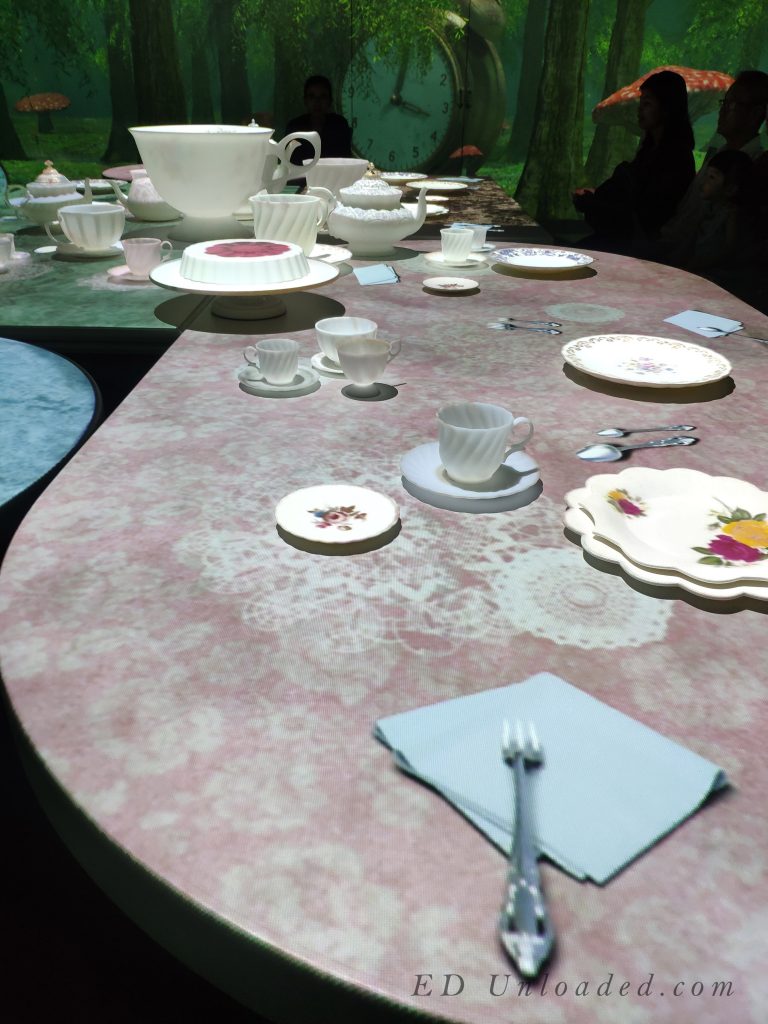 The Wonderland got my kids all excited and they were talking about it for days. I had to dig up my old copy of the story to read to them and I promised a screening of the cartoon soon.

Yea, even the little one who was so scared pestered me for the cartoon of “the wonderland”.

Tickets are priced at $16 per adult and $12 for seniors, students, and children (For Singapore Residents). You can get yours at the MBS box offices, website, or at the ticketing counters outside the ArtScience Museum.

It took @theopenpansg to bring me back to the kitc

Big congratulation to all the members from @etzone

So good to catch up with our overseas member @ambe

Our devotion medley from our 2019 songs are out!

Thank u so much for the lovely cookies from @raymo

Congrats to Stanley and Elaine in tying the knot!

Joining in with @nnathantayy to find out why some