Athens Greece is one of the most historical cities in Europe and one of the cities that is on our bucket list. After visiting Santorini, we had the pleasure to visit Athens in 3 days. These are the highlights and our best of Athens Greece.

The best part of Athens is that the town’s historic center together with the archaeological sites are all within walking distance from each other. Therefore, one does not even need to take the train or subway to all the major tourist sites. We will therefore strongly recommend staying within the city center.

During our 5D4N stay in Athens, we stayed at the Cecil Hotel In Athens.  It cost us SGD 81 per night and this was our second choice hotel. The other hotel which we would recommend within the same price range is the Attalos Hotel. Both Hotels are along the same street, with Attalos slightly nearer to the train station by 100m.  Rooms at the Cecil Hotel are pretty basic and they are generally small, like any other hotel in Europe.

Nearest train station to our accommodation is Monastiraki and taking 45min from the airport, we were able to drag our luggage from the station to the hotel within 5 mins. There is also a supermarket near the hotel, which offered us mineral water and other basics at essential prices. Therefore, if you are looking at a budget holiday, the Cecil Hotel is a good choice.

In this article, we are going to cover our favorite Top sights in Athens and also our Top Eats in Athens.

The Acropolis of Athens and its monuments are universal symbols of the classical spirit and civilization of Greece. The Acropolis of Athens is the most striking and complete ancient Greek monumental complex still existing in our times. It is situated on a hill of average height (156m) that rises in the basin of Athens. 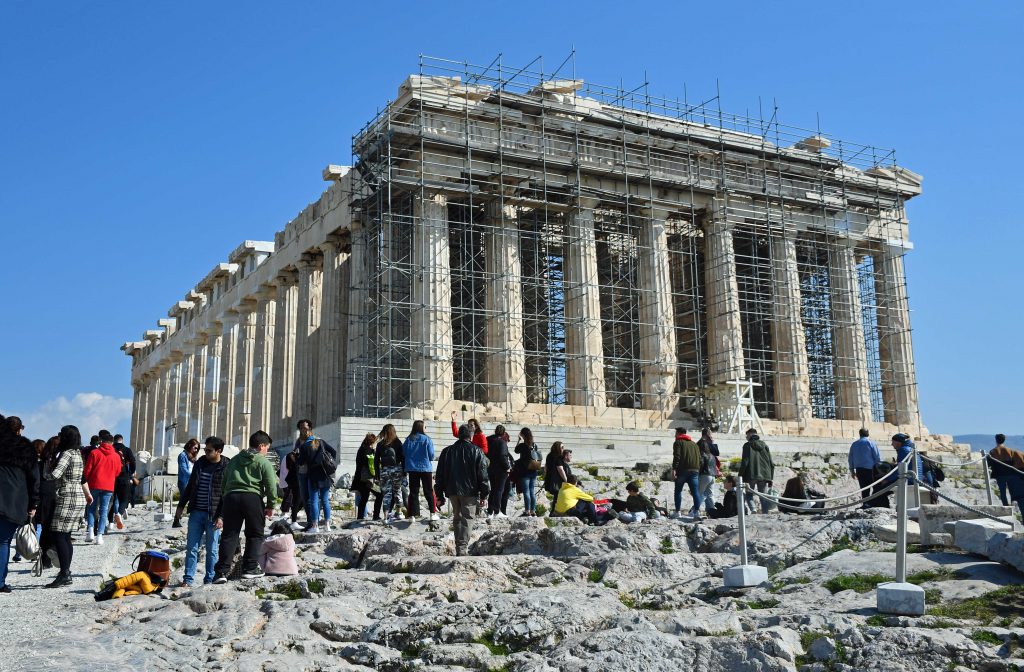 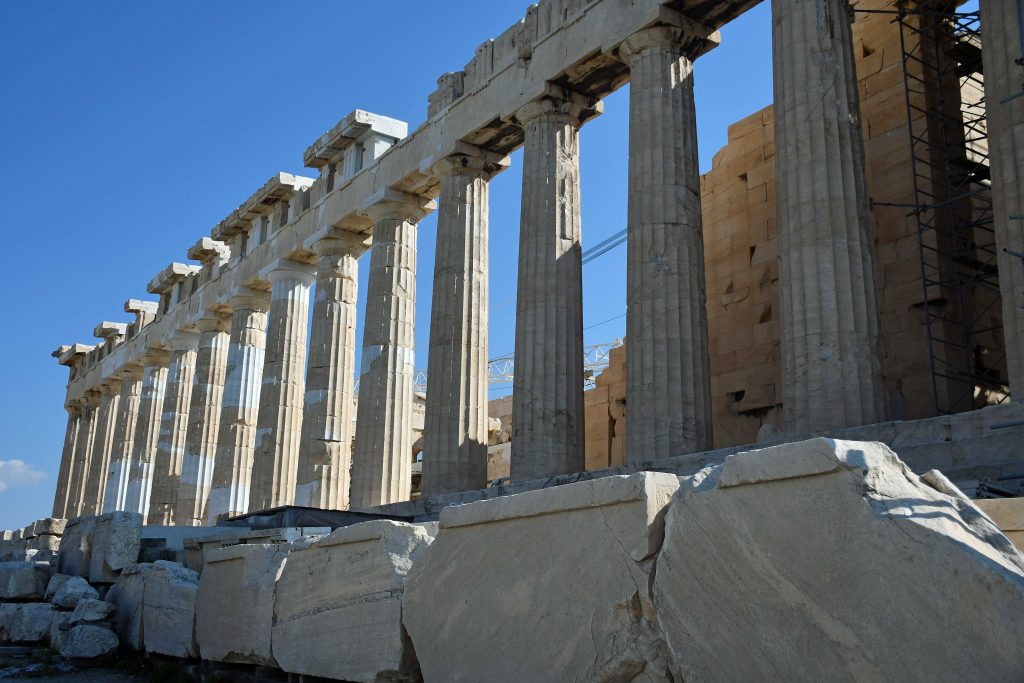 In our list, this should be the No.1 stop for any tourist in Athens, as the history of this place is simply breathtaking.  As with any top tourist site in Athens and the rest of Europe, reaching the sights early is important. By mid-day crowds are at their peak and they make it difficult to take any photo. This was mid morning at the Acropolis, with crowds picking up.

Most of the sights that one will see in postcards is found in the Acropolis. An example will the the Erechitheum, which is an ancient Greek Temple. Dedicated to both the Greek God of Athena and Poseidon. 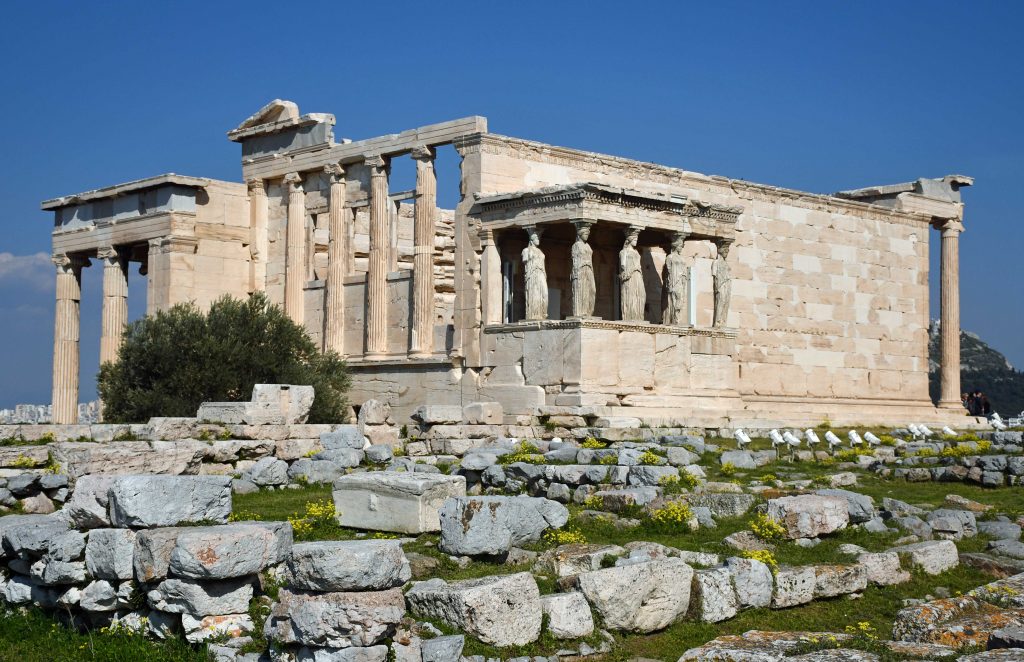 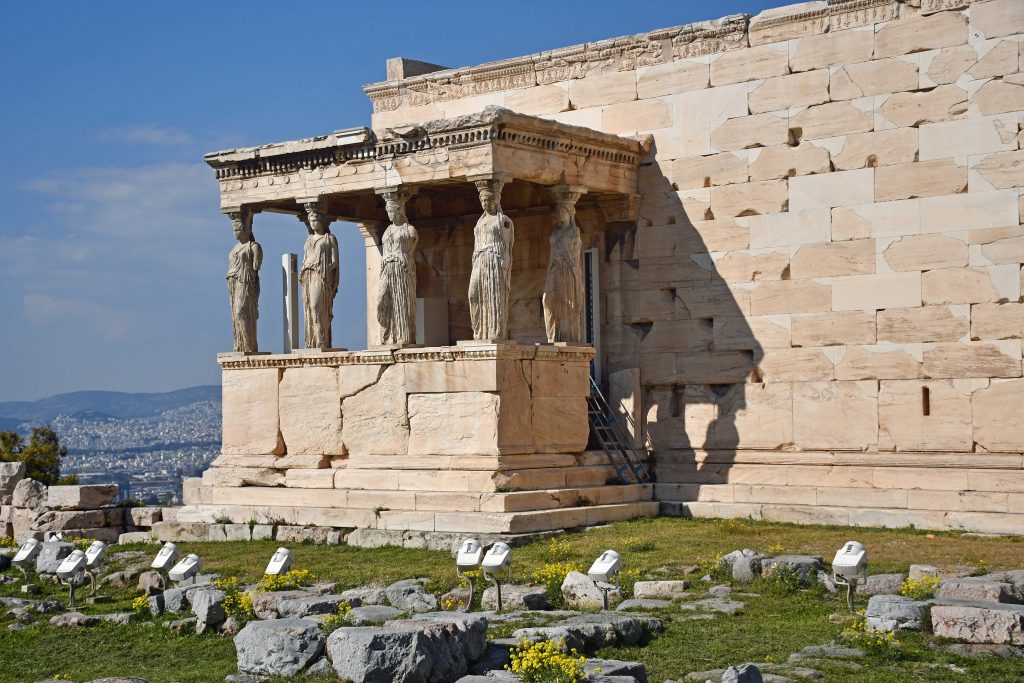 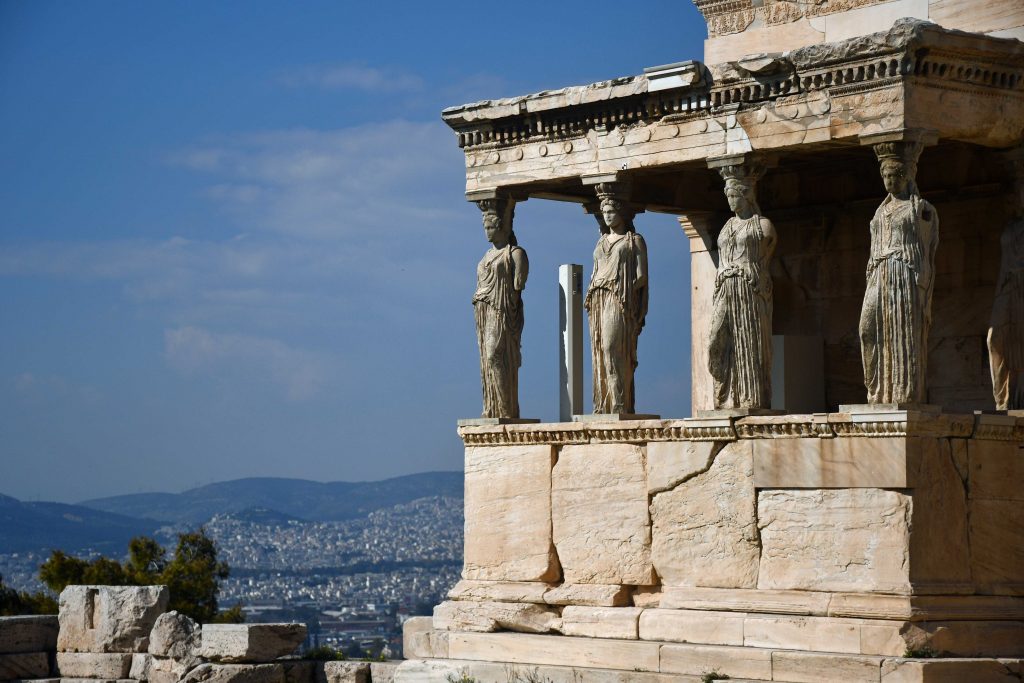 The best-known and most-copied examples are those of the six figures of the Caryatid Porch of the Erechtheion on the Acropolis at Athens. One of those original six figures, is now in the British Museum in London. The Acropolis Museum holds the other five figures, which are replaced onsite by replicas. The five originals that are in Athens are now being exhibited in the new Acropolis Museum, on a special balcony that allows visitors to view them from all sides. 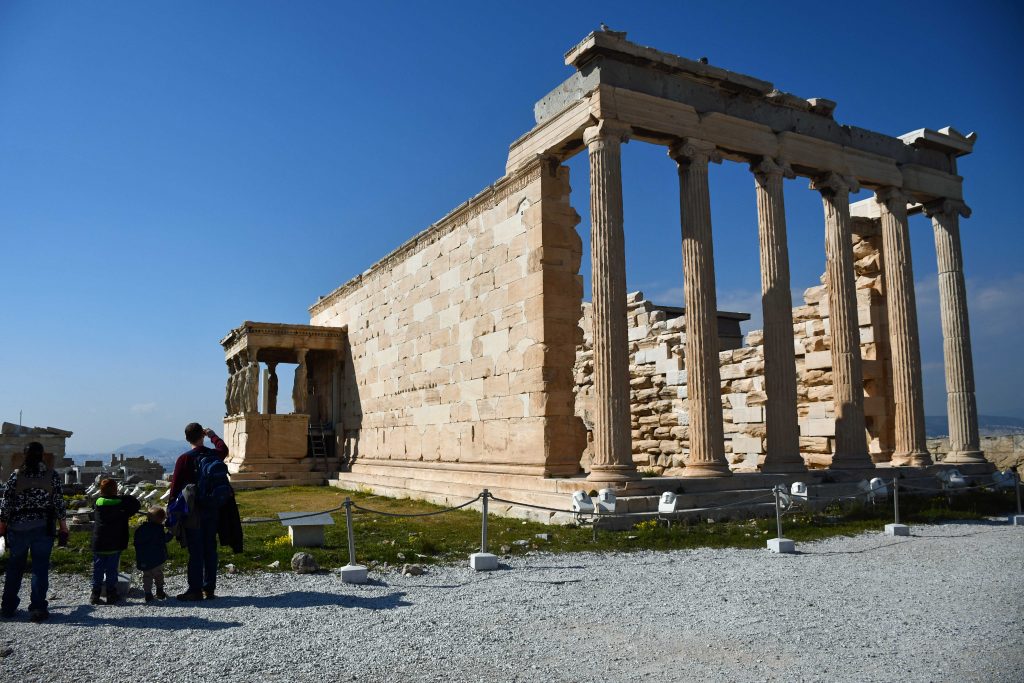 Along the slopes up to the Acropolis, one will find the Odeon of Herodes Atticus. In ancient times, Odeons were built for musical contests and this ancient stone theatre has gone on to host some of the world’s best musical performances during the last 60 years since its modern day re-opening, including Nana Mouskouri, Luciano Pavarotti and Frank Sinatra to name a few. 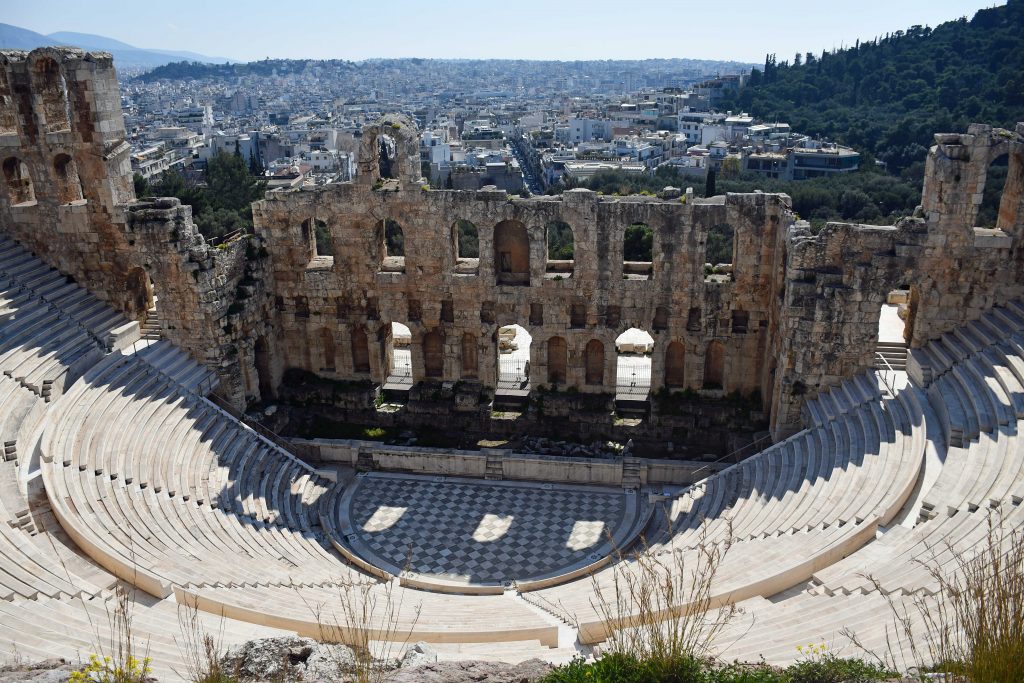 Price of tickets in the summer is 20 Euros per adult, with ticket prices going for only 10 Euros in Winter.

The Acropolis Museum is an archaeological museum focused on the findings of the archaeological site of the Acropolis of Athens. The museum was built to house every artifact found on the rock and on the surrounding slopes, from the Greek Bronze Age to Roman and Byzantine Greece 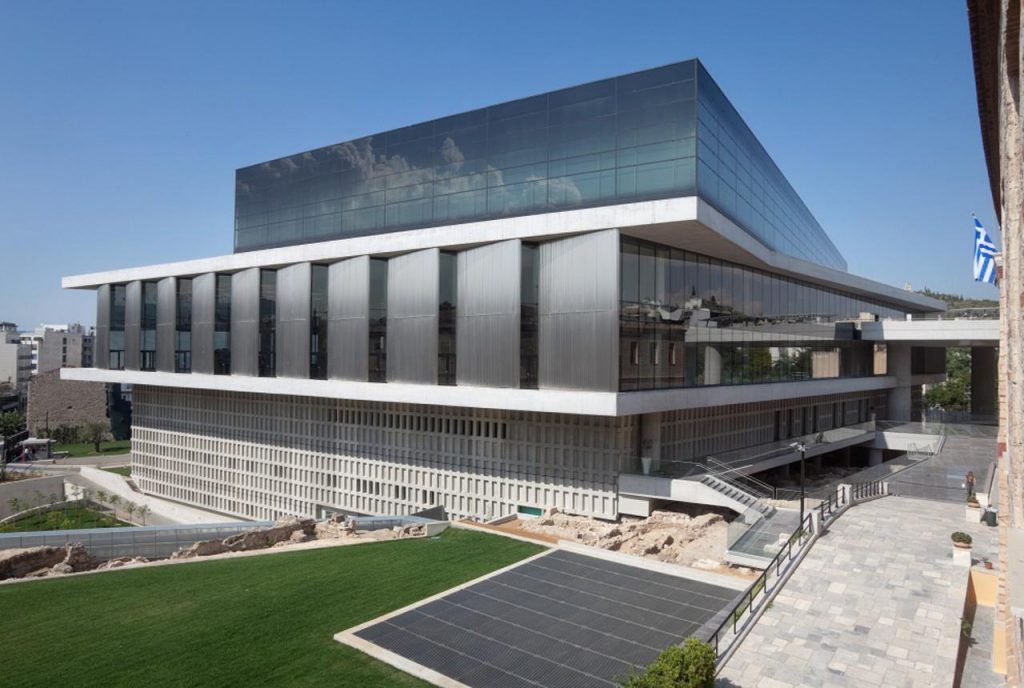 Basically in order to preserve the history at the Acropolis, they moved the sculptures indoors to help preserve the artifacts. Most of the stuff that you see in the sun are replicas and the authentic stuff is indoors. For example,  the six maidens of the Caryatid Porch of the Erechtheion are housed here. (1 is at the British Museum).

Therefore, for the full Acropolis experience, the Museum is an essential stop! 😉 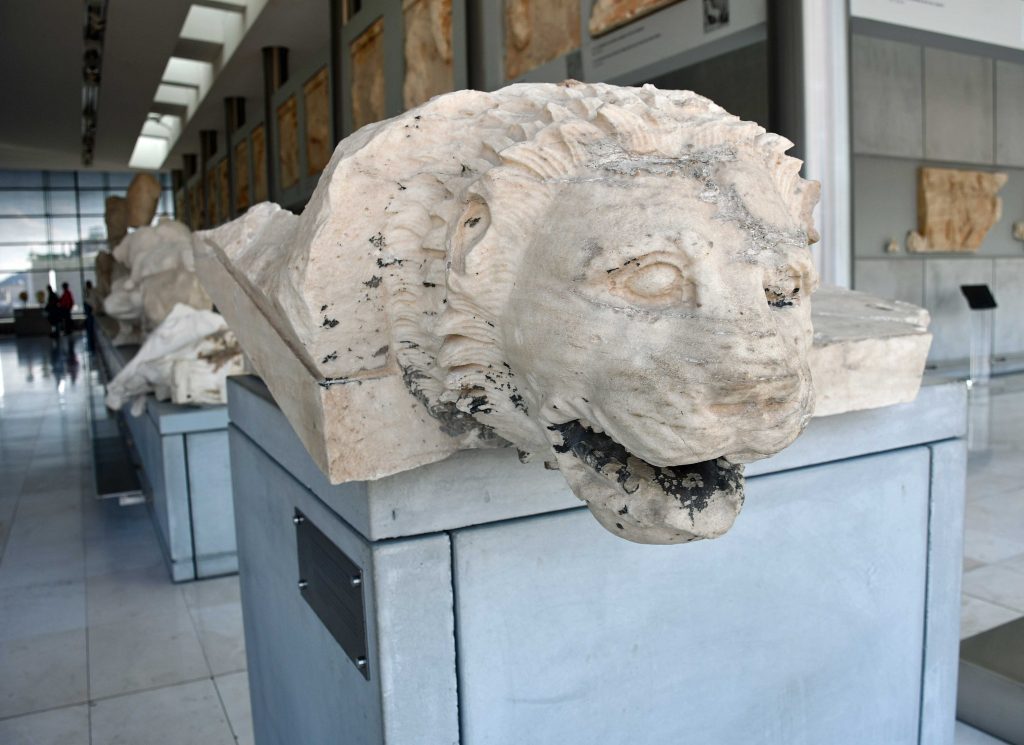 Do not expect what you see in London to be replicated here, but the changing of the guard in Greece is a Free activity that is a break from looking at the Museums. The thing about Greece is that there is a bit of an overkill of History for the average history buff. 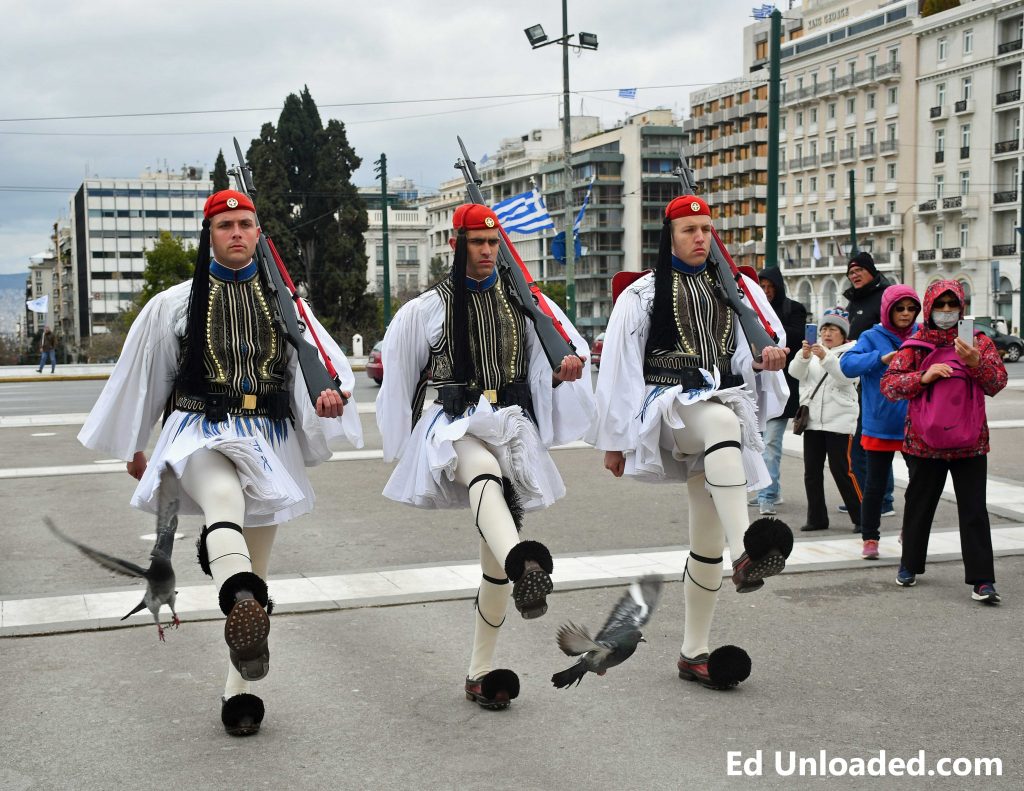 The soldiers dressed in the traditional Greek costume are known as the Evzones. They are a special unit of the Hellenic Army, also known as Tsoliades, who guard the Monument of the Unknown Soldier in front of the Hellenic Parliament and the Presidential Mansion. Through the historical movement of Greece, the Evzones have become symbols of bravery and courage for the Greek people. The Presidential Guard, as the unit is now called, was constituted in 1868 and has taken many names through centuries (Guard of the Flag, Royal Guard, etc). 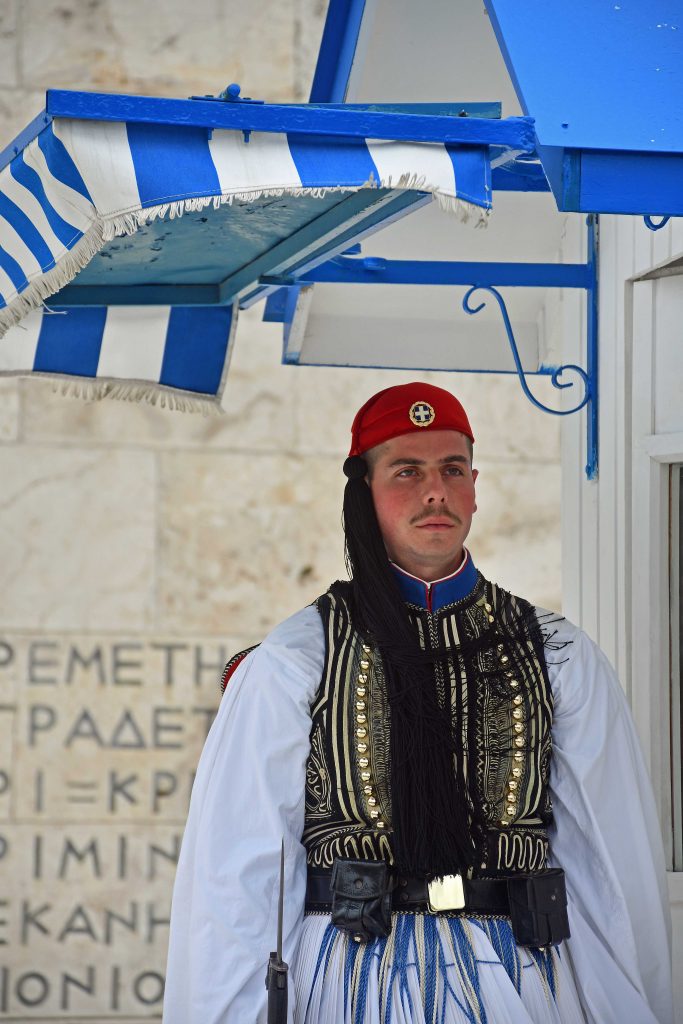 There is a changing of the guard every hour of the day but on Sunday it is the official ceremony with the official customs. If you are there on the Sunday, be at Syntagma square at 11am. 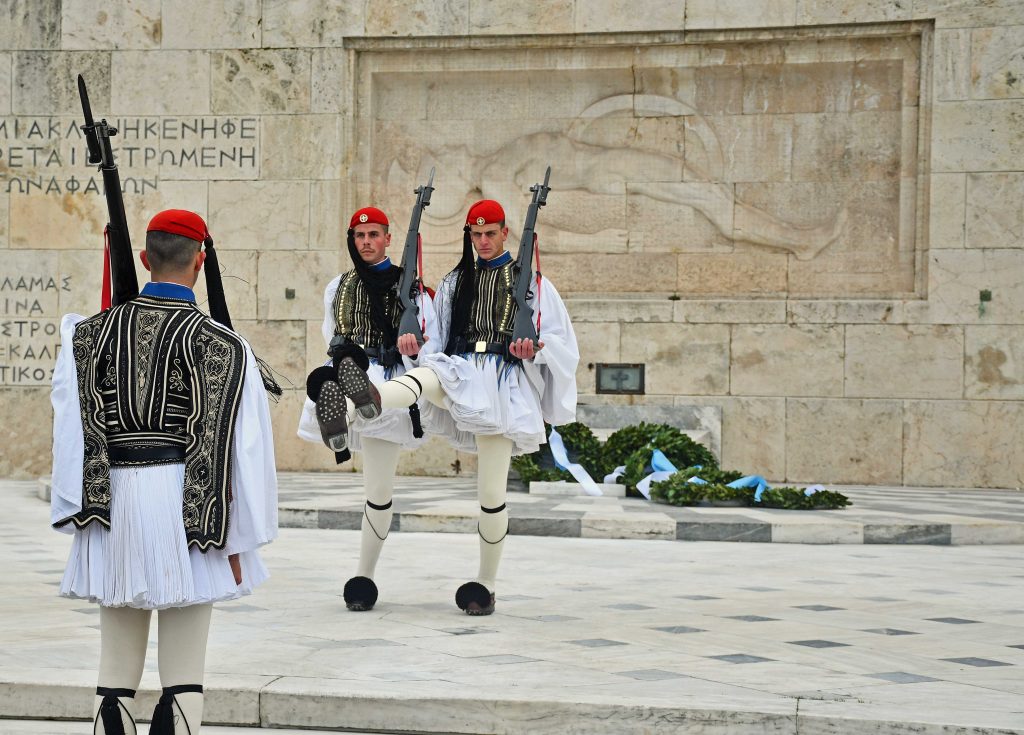 The best thing about Athens is that everything is within walking distance of each other. We did not have to take the subway to any other location except to the Airport and the benefit of the close proximity means that we cut down on our travelling expenses. 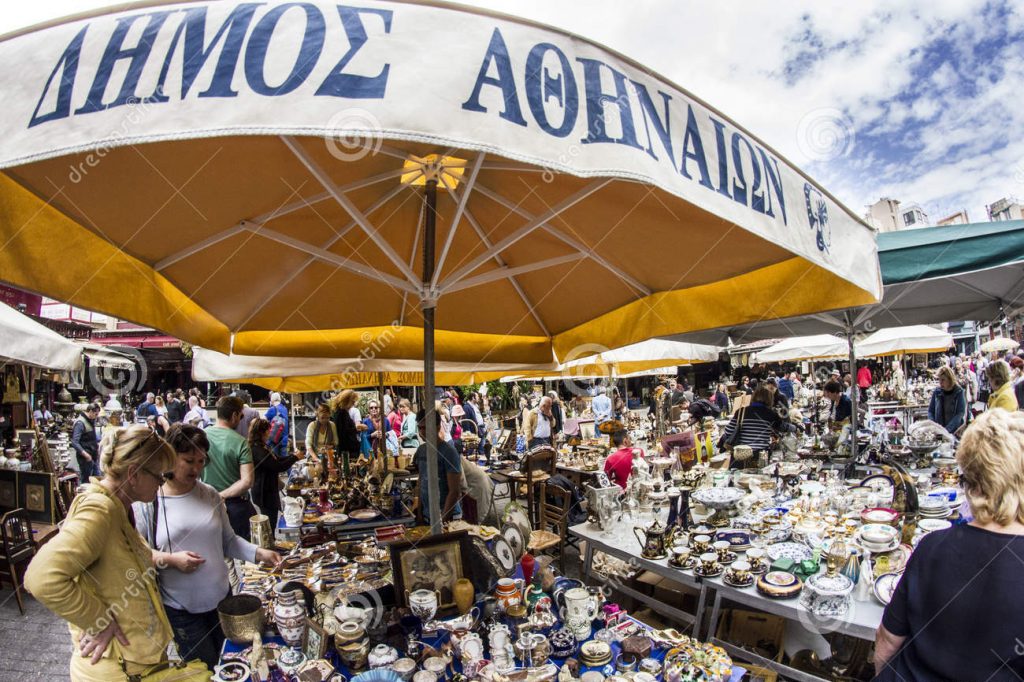 Monastiraki Flea Market is located next to Monastiraki metro station, the Monastiraki flea market, though technically not a flea market, is a common attraction in Athens. The area is a collection of shops, selling almost everything, from cheap souvenirs to leather goods, vinyl, icons, musical instruments and jewellery, postcards and local traditional products. As a rule of thumb, try not to visit the cafes and bars too near to the station, as they are usually a bit more pricey and they do not offer the best value for money.

Athens Central Market is located on the busy Athinas street, the central market, also known as Varvakeios, is a hectic and vibrant market place. This market is just next to our Hotel (Cecil Hotel). Split between meat and seafood and fish products on one side of the street, and fruits and vegetables on the other side, the Varvakeios offers a sensory experience. Shop for fresh olives and feta cheese, sun-kissed fruits and vegetables and even spices. The meat area may not be for all, as it is not surprising to see meat carcasses hanging up, while the fish section may require more than just a pair of flip flops due to the amount of water on the floor. Open from Monday to Saturday, the central market operates from early morning until late afternoon.

Our favorite Budget food that did not burn a hole in our pocket is Tzatziki. One can find them not just in Athens, Mykonos, London but also in New York. Located at Athens 105 55 Greece, it is just 500m from the Acropolis and a short walk from the Monastiraki metro station. 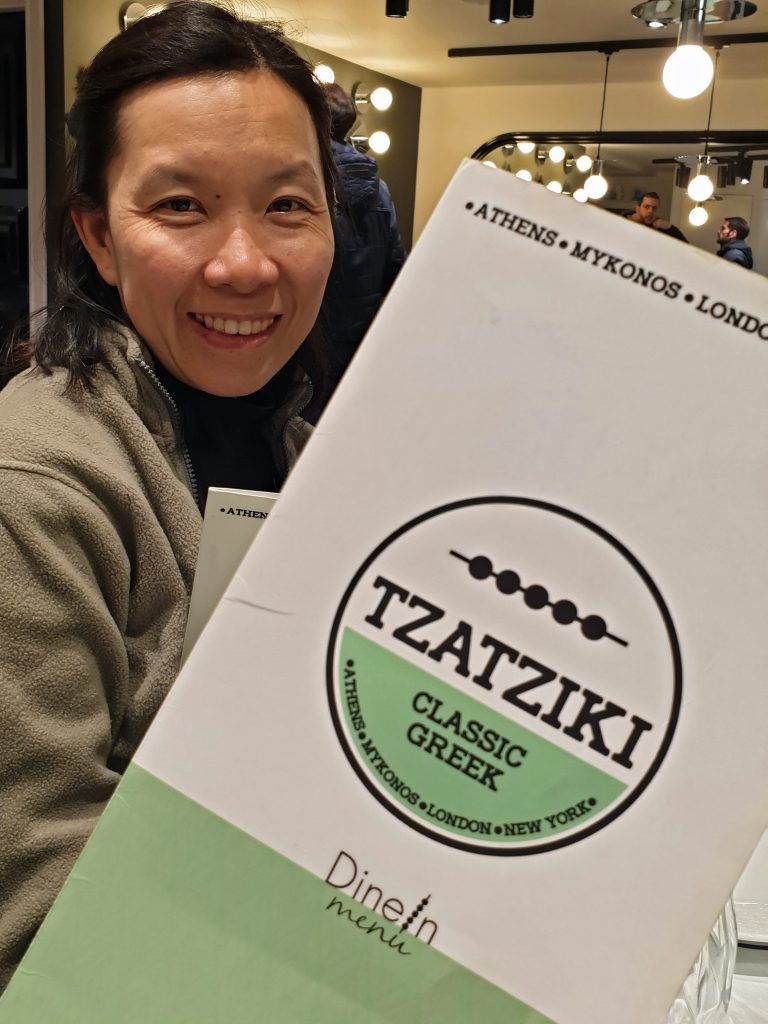 We actually stumbled upon it, as we walked around the streets of the Monastiraki flea market and the servings are big and value for money.

The Gyros here are delicious and I visited the restaurant at least thrice during my stay in Greece, as the prices and servings was just too good to resist. Prices for your meats start at 8.9 Euro to 9.9 Euros for a meat with a Pita. 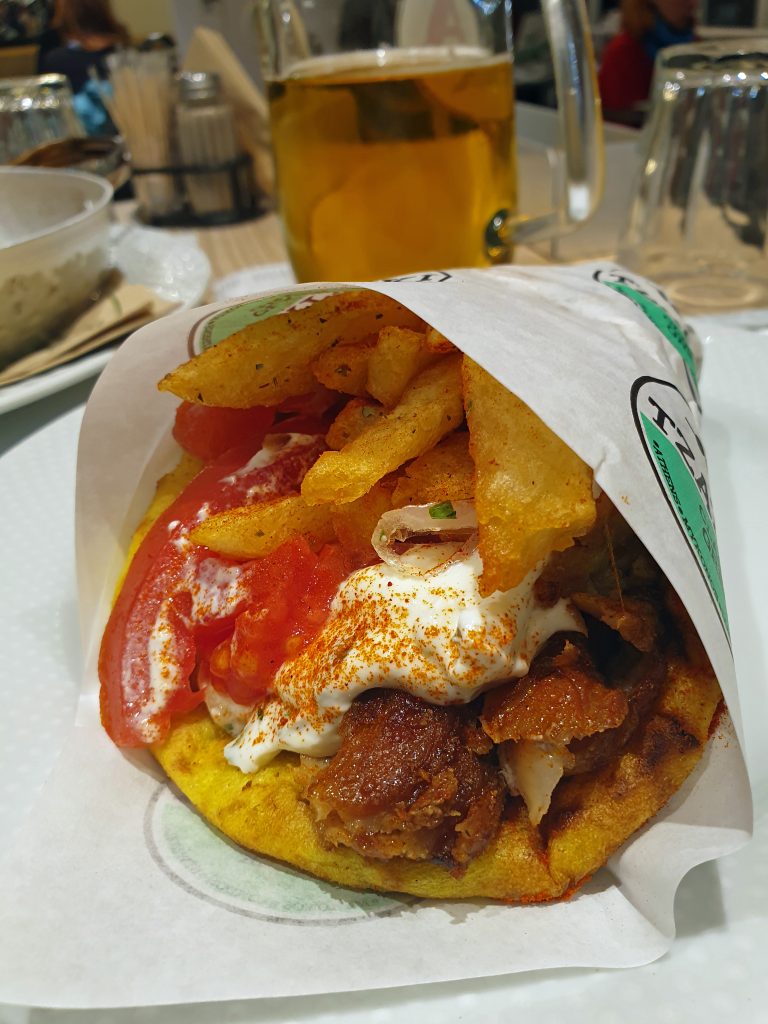 For Dining options that are more expensive, a good local joint that we found is Ta Karamanlidika tou Fani 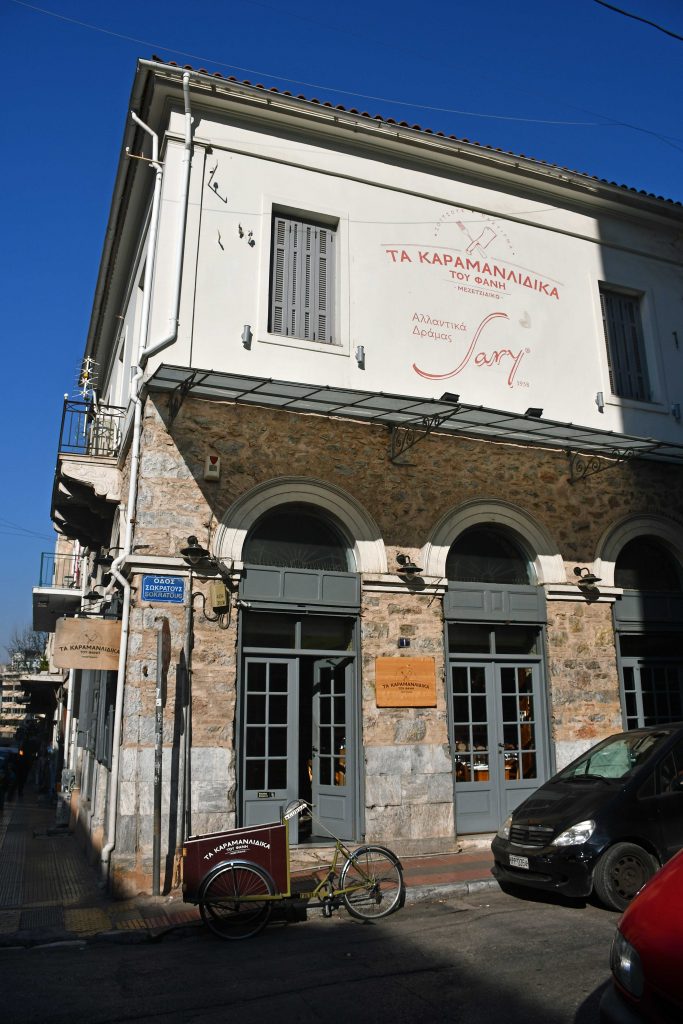 We found them via TripAdvisor as it is continues to be highly rated by all diners and with authentic local cuisine, we went back to the restaurant twice. Needless to say, the restaurant was really crowded during Dinner time and it is not easy to get a table unless you choose to dine early. 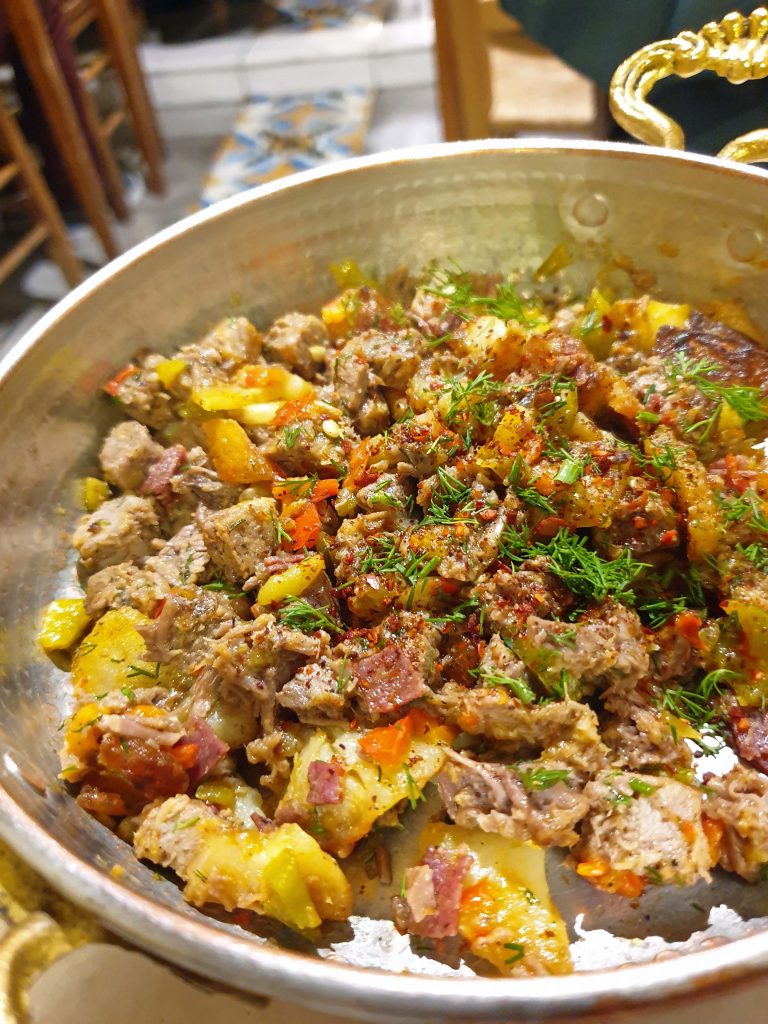 Service was great and although they spoke minimal English, we gestured our way thru the items in the menu and pointed out to other items which diners ordered to sample the dishes we wanted to try for ourselves. 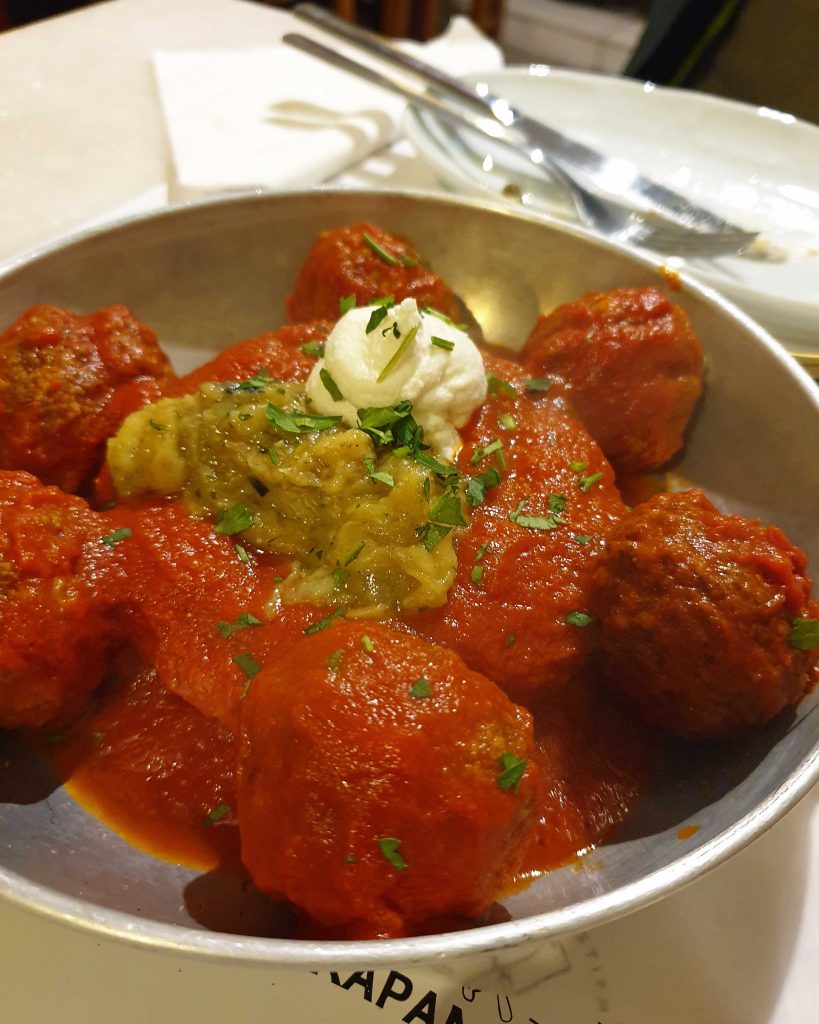 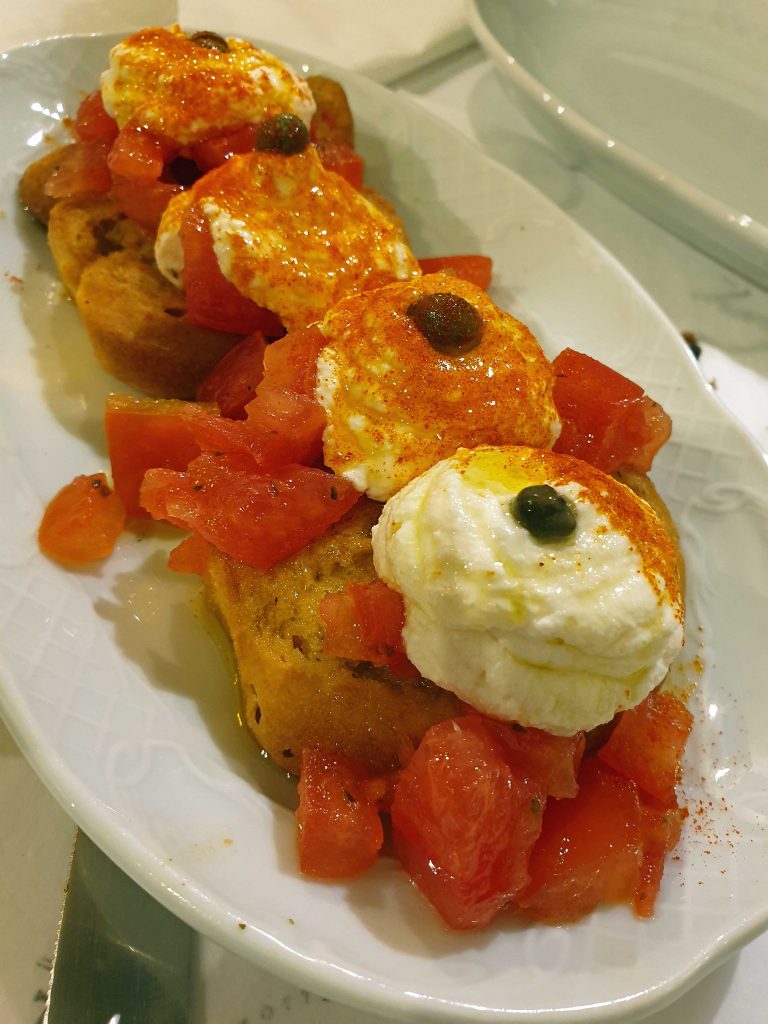 As you can tell, we had a great time in Greece and even though the weather was a bit chilly when the wind blew, it was definitely a great experience.

If you are heading over to Santorini while in Greece, do head on over to our Santorini article to find out the best things to do over there.