Everyone has heard of Shaolin Kungfu! Catch the real deal for yourself at Marina Bay Sands this July! The Shaolin Kung Fu monks will be in town, to perform and demonstrate their death-defying stunts, and mind-blowing Kung fu! If you are a martial arts buff, you will need to  catch these exponents  in the flesh. 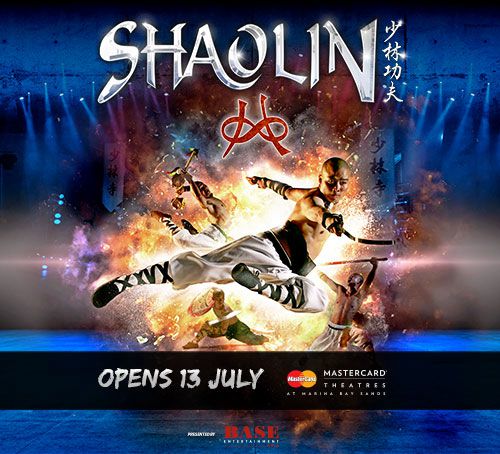 Growing up, I remember watching Jet Li strutting around in his Kung Fu garb, and demonstrating his Kung Fu expertise, against the backdrop of the famed Shaolin Temple. The movie and previous movies before that, has captured the imagination of every young Chinese boy, and we have constantly demonstrated our creativity, by adding Shaolin Kungfu into our playground games.

This July, 20 Monks from this famous Chinese Temple, will be displaying their expertise in a choreographed theatrical performance. If you are not too well versed with Shaolin history, do not fret. From the onset, the context is set, as viewers will be introduced to one of the famous Shaolin stories. History has it, that one of the Chinese Emperors ordered a massacre of the Buddhist monks, after discovering that their Kungfu powers might be a threat to his throne.  Only 5 survived the massacre, and eventually, these 5 raised a new generation of monks, that would one day, make a return to the temple.

How was the Show Shaolin?

Well! They made the crowd go “Woo!” and “Wah” with their Kung fu expertise. They did handstands on a finger, broke poles and concrete, with their heads and bodies. and they made the poles of spears bend, as their bodies were impregnable to the traditional Chinese weapons.

Moving with great dexterity with knifes, choppers and Chinese nunchucks, the speed of the execution was impressive. The duels were well choreographed, and one felt like you were watching a Kung Fu movie up close. If you love action, you will love the show.

The only drawback about the performance, was that the production is a bit slow to take off. There is a bit too much narration by the voiceover, and  the storyline is a bit thin. However, as the Chinese monks cannot be expected to be linguistic geniuses , as well as kungfu experts, one needs to take these limitations into consideration. Other than that, the kung fu does live up to expectations! 🙂

If you are a budding or a big Kungfu expert, it is not too late to catch the show, as Shaolin Kung Fu will be in Singapore till the end of July.

No Responses to "Shaolin Kung Fu"